In 1965, Greenbriar Mall opened as the first enclosed mall in the Atlanta area.  It is located on Greenbriar Parkway, just off the S.R. 166 and one block from Campbellton Road. Rich’s, now Macy’s, and J.C. Penney, now Burlington were the mall anchors.  It had movie theaters located on the lower level.  Later those theaters closed and Magic Johnson built the 12 screen theater complex and TGI Friday’s on the back side of the mall, just as he did in Los Angeles, Chicago and other major cities.  A few year later, the Magic Theaters and Friday’s closed.  Later, another company reopened the theaters.  By that time Camp Creek movie theaters had opened with digital movie technology.  Still using the old reel-to-reel  technology, the newly re-opened Greenbriar theaters never had a chance against the new digital technology.  No one seems to know why Greenbriar’s new owners did not convert to digital to save the business.

Meanwhile, in the 1970’s and 1980’s Cumberland, South Lake, Shannon, Perimeter and other malls began opening around the metro area.  Lenox Square Mall decided to enclose its’ open air mall more than doubled in size.

The Chik Fil-A was the first inside a mall. It also had one of the first Black Santa’s in the area (and probably the state and southeast).  People still bring their children and grand children from neighboring states to visit its’ very popular Santa.  Circuit City was added in a new building beside Picadilly Restaurant and Cub Foods (now a nursing school) opened on the property.  Over the years the Greenbriar area continued to grow.  As the recession hit the U.S. and local communities, Cub Foods, Circuit City and several other national chains closed.  Across Atlanta, Ford, GM, Scripto, and other manufacturing facilities closed, people lost jobs and homes. The Greenbriar community as many others have faced numerous challenges.  Yet, it seems to be somewhat resilient. Most are grateful that Macy’s is still open and the main mall anchor.  According to mall officials, Burlington will relocate to Camp Creek leaving an opening for retail or mixed use options.

With the MARTA Board recent approval of a Light Rail system to run from Greenbriar/Campbellton Road connecting across town to Emory, Greenbriar’s future is brighter than ever.

Earlier this year, The Atlanta Regional Commission, ARC, funded an update of the 2001 Greenbriar Livable Centers Initiative, LCI. Conducting community meetings at Greenbriar Mall and at the Southside YMCA, the Sizemore Group Planning team has received lots of feedback.  It includes what the community wants and what they do not want in this 2018 plan.  This time, the goal is to move forward and actually implement the plan.  The  question is:  How successful will the Greenbriar LCI be?   Many are committed to staying engaged to make sure the 2018 Plan gets its’ wings.  It is quite exciting!

Upon reading this recent article, I wanted to share it with you because the successful plan in Chamblee can be customized for Greenbriar.  Everyone needs to know what is possible and stay engaged.  So, now it appears the timing is right.  Greenbriar has the perfect opportunity to rise again and sustain itself.  Yay!!

Here is the article from the Atlanta Regional Commission:

While the crowd waited to set foot in the hip, new eatery and check out the festive back patio, Clarkson recalls thinking, “This is crazy: people are lined up along Peachtree Road. When was the last time you saw something like this, in the 1950s?”

Two decades ago, the same Chamblee strip was mostly a concrete desert, defined by vacant buildings and empty parking lots. That describes much of the city at the time, as Chamblee struggled after generations of factory jobs relocated.

The turnaround began in 2000 with a Livable Centers Initiative (LCI) grant from the Atlanta Regional Commission that helped the city craft a revitalization plan focused on 300 acres near the Chamblee MARTA Station. While some communities fought to keep rail out, Chamblee made a long-term bet that embracing transit would spark a renaissance.

To read the full article, copy and paste the link below.  Or click on it:

Yet another reason to vote as early as possible.  Adams Park Library facility problems cause it to close early yesterday.  Full story on link to Nextdoor article below:

The Georgia Justice Project needs you to move to action to help give people with certain convictions a second chance.  This is your chance to impact legislation.  See the information below, contact the committee members and pass this on.  We can make an impact when we make our voices heard.

What: HB 981 would limit public access to certain convictions, which would remove barriers to employment and housing for many Georgians.

Action: Call or email House Judiciary Non-Civil members listed below and express your strong support for HB 981. The bill needs to be passed by the House before Crossover Day, February 28th, in order to move to the Senate.

Message (this is a template, but modify as you see fit!):

As a concerned Georgian, I ask that you support HB 981. It is time for Georgia to follow in other states’ footsteps and allow certain past convictions to be limited from public view. Research demonstrates that this measure increases job opportunities, boosts our economy, and increases public safety.

Please support HB 981 – it is critical for our state.

Thank you for your time and your consideration,

How: Contact as many committee members as possible to express your strong support for HB 981. The red names below are the priority contacts and the bolded names are the other members of concern. We recommend making a phone call and sending an email with the text above to follow up, but one or the other is also very valuable!

To maximize your influence, contact as many members as you are able, as soon as possible. 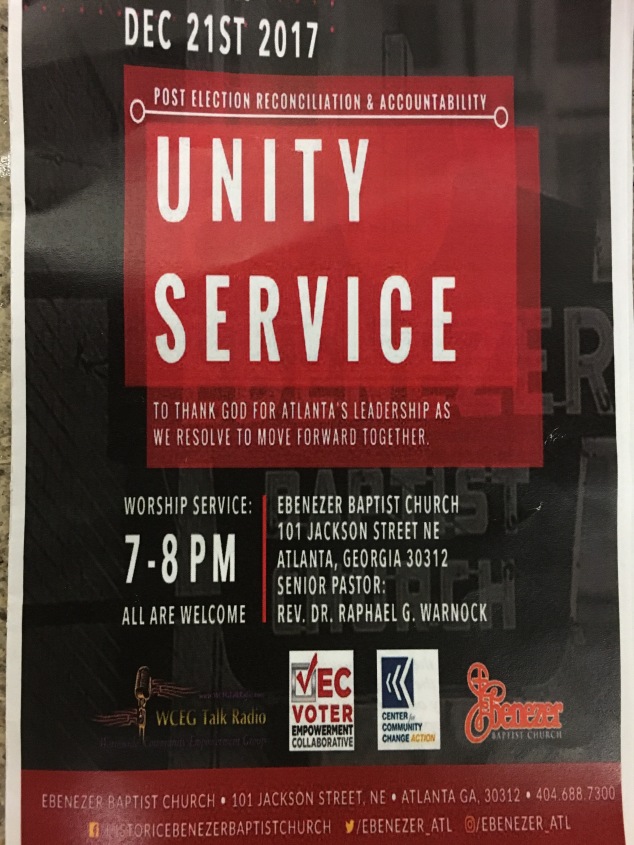 In the spirit of unity, the event was put together by local Black ministers as an interfaith event to help the City of Atlanta after tough and divisive runoff elections.

At last Sunday’s church service at Ebenezer Baptist Church, Pastor Warnock announced that Mayor-Elect Keisha Lance Bottoms said she would attend.  Well, she was not there.  Atlanta City Council President-Elect Felicia Moore is out of town. 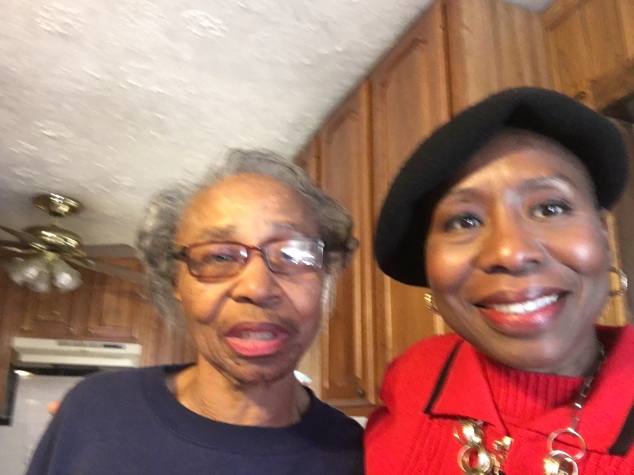 Birthdays are important.  Every year is a milestone and I truly grateful for it.  Today as I celebrate my birthday, I did not have any elaborate plans.  Just spending time with my mother made my day special.

In case I do not say it enough, “Thank you mom for all you do. Love, your daughter.”

One of my favorite sayings is, ” Be grateful to be alive and in your right mind.  There are lots of people who did not wake up this morning, and they were not sick.”

Early voting for the December 5 runoff elections starts today, Monday, November 27 through Friday, December 1 from 7am-7pm.  These elections include the city of Atlanta, Fulton County, Atlanta Board of Education, City of East Point and other special elections across the metro area and state to replace state legislators who resigned to run for other seats.

For early voting locations, use the link below:

For more information, to see if you have a local municipal election, and to see exactly what is on your ballot,
get your sample ballot BEFORE you go to the polls and encourage your friends and neighbors to do the same:
http://www.mvp.sos.ga.gov 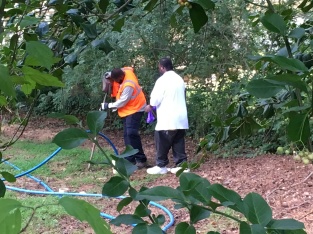 When you cannot flush your toilet, it is a BIG deal. Big enough to cause terrible stress and anxiety.  So, when I had a problem flushing despite all new sewer pipes that were installed less than two years ago, I knew I had to call in the City of Atlanta’s Watershed Calvary* to come up with a quick resolution.

Well, in less than four hours of accessing an extremely complicated sewer blockage the Watershed team and equipment directed by twenty-plus year veteran and Atlanta native Danny Mathis left with myself and all neighborS being able to flush their toilets.

This resolution was a team effort that started with my call to our neighborhood planning unit representative, Billy Lundsford, yesterday.  He reminded me that this request had to be initiated with a call to 311 to get a service request number.  From that call to 311, the wheels  started turning and the process worked.

From the bottom of a grateful heart, I know words are not enough to express my gratitude. However, I say thank you to Mathis crew for allowing me to once again experience the joy of flushing. 🙂

The Watershed team was so good, it was like the Calvary* showing up.  So, I call them the Watershed Calvary.  I hope if you ever experience a problem flushing, I hope you have a “Calvary” to call. 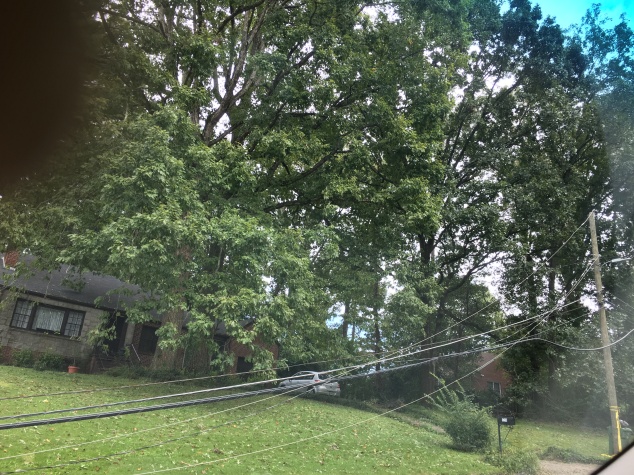 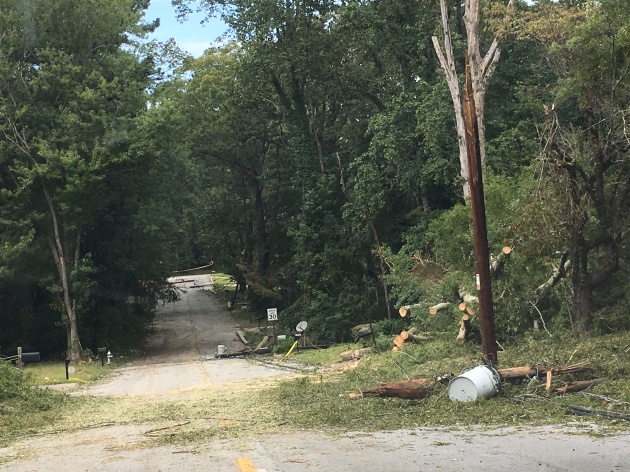 A picture is worth a thousand words. Here are several pics taken after Irma left a trail of destruction across Metro Atlanta and Georgia.  It is a collection of pictures taken by myself and friends as we realize we were merely inconvenienced being without power for two to five days. 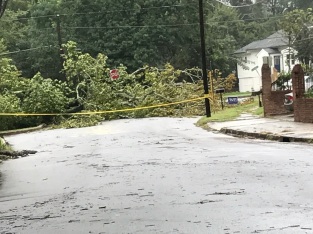 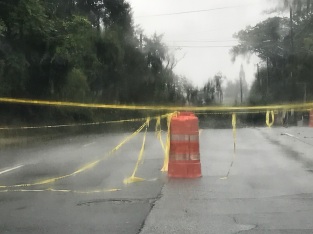 These four pics are from Cecelia in West End. The tree fell away from the house!! 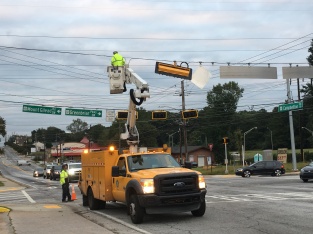 Above:  A City of Atlanta crew works to repair traffic signals and street signs damaged by Irmas high winds at Campbellton Road and Geeenbriar Parkway.

Above:  Power station at Campbellton Rd. and Mt. Gilead “looks” as if it should be up and running. Yet area residents within a 20 block radius have been in the dark for 3-4 days.

In the islands and across Florida, tens of thousands of residents have lost everything and have no place to go.  Yes.  As we pray for them, we are grateful.  And we will not complain.

This morning I had a good workout at the gym.  No reason to sit home and mope about, “Your services are no longer needed.”  I am jobless,’but not hopeless.  The Lord never closes a door without opening a window or two.

It is important to get out and workout in order to work through the shock of my job loss and land on my feet.  The workout  was therapeutic.

In the photo above, Carolyn, Sandra and I share a laugh. It is a blessing to have friends who lift your spirits.  We have been working out and taking classes together for a couple of years.

Your Power Connection
Create a free website or blog at WordPress.com.